The Growth of the Tactical Beard 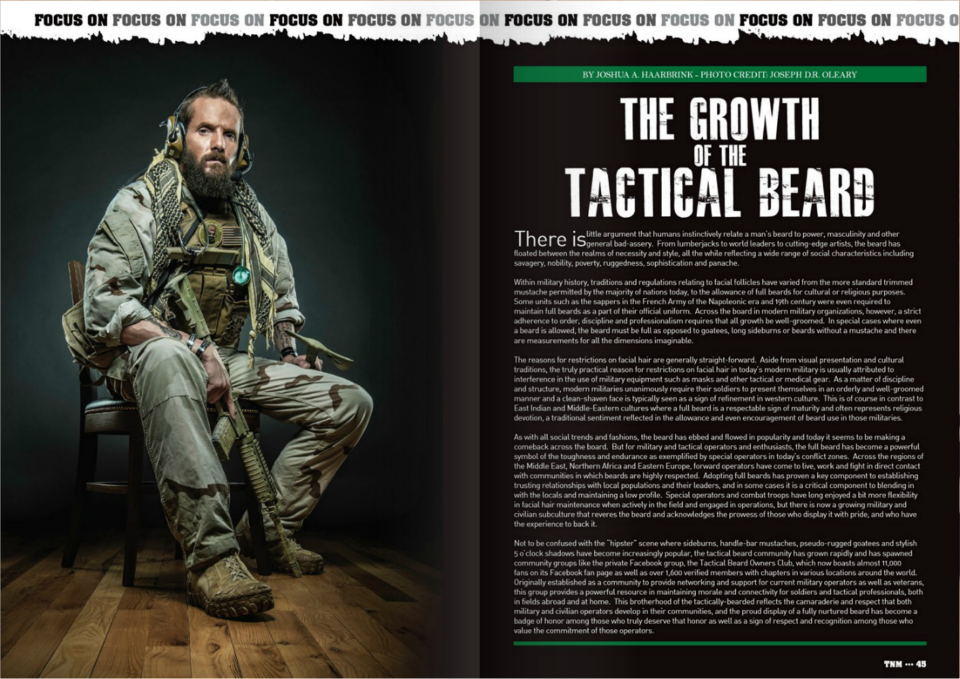 This article was originally published on GunsandTactics.com and was printed in Tactical News Magazine.

There is little argument that humans instinctively relate a man’s beard to power, masculinity and other general bad-assery. From lumberjacks to world leaders to cutting-edge artists, the beard has floated between the realms of necessity and style, all the while reflecting a wide range of social characteristics including savagery, nobility, poverty, ruggedness, sophistication and panache.

Within military history, traditions and regulations relating to facial follicles have varied from the more standard trimmed mustache permitted by the majority of nations today, to the allowance of full beards for cultural or religious purposes. Some units such as the sappers in the French Army of the Napoleonic era and 19th century were even required to maintain full beards as a part of their official uniform. Across the board in modern military organizations, however, a strict adherence to order, discipline and professionalism requires that all growth be well-groomed. In special cases where even a beard is allowed, the beard must be full as opposed to goatees, long sideburns or beards without a mustache and there are measurements for all the dimensions imaginable.

The reasons for restrictions on facial hair are generally straight-forward. Aside from visual presentation and cultural traditions, the truly practical reason for restrictions on facial hair in today’s modern military is usually attributed to interference in the use of military equipment such as masks and other tactical or medical gear. As a matter of discipline and structure, modern militaries unanimously require their soldiers to present themselves in an orderly and well-groomed manner and a clean-shaven face is typically seen as a sign of refinement in western culture. This is of course in contrast to East Indian and Middle-Eastern cultures where a full beard is a respectable sign of maturity and often represents religious devotion, a traditional sentiment reflected in the allowance and even encouragement of beard use in those militaries.

As with all social trends and fashions, the beard has ebbed and flowed in popularity and today it seems to be making a comeback across the board. But for military and tactical operators and enthusiasts, the full beard has become a powerful symbol of the toughness and endurance as exemplified by special operators in today’s conflict zones. Across the regions of the Middle East, Northern Africa and Eastern Europe, forward operators have come to live, work and fight in direct contact with communities in which beards are highly respected. Adopting full beards has proven a key component to establishing trusting relationships with local populations and their leaders, and in some cases it is a critical component to blending in with the locals and maintaining a low profile. Special operators and combat troops have long enjoyed a bit more flexibility in facial hair maintenance when actively in the field and engaged in operations, but there is now a growing military and civilian subculture that reveres the beard and acknowledges the prowess of those who display it with pride, and who have the experience to back it.

Not to be confused with the “hipster” scene where sideburns, handle-bar mustaches, pseudo-rugged goatees and stylish 5 o’clock shadows have become increasingly popular, the tactical beard community has grown rapidly and has spawned community groups like the private Facebook group, the Tactical Beard Owners Club, which now boasts almost 11,000 fans on its Facebook fan page as well as over 1,600 verified members with chapters in various locations around the world. Originally established as a community to provide networking and support for current military operators as well as veterans, this group provides a powerful resource in maintaining morale and connectivity for soldiers and tactical professionals, both in fields abroad and at home. This brotherhood of the tactically-bearded reflects the camaraderie and respect that both military and civilian operators develop in their communities, and the proud display of a fully nurtured beard has become a badge of honor among those who truly deserve that honor as well as a sign of respect and recognition among those who value the commitment of those operators.